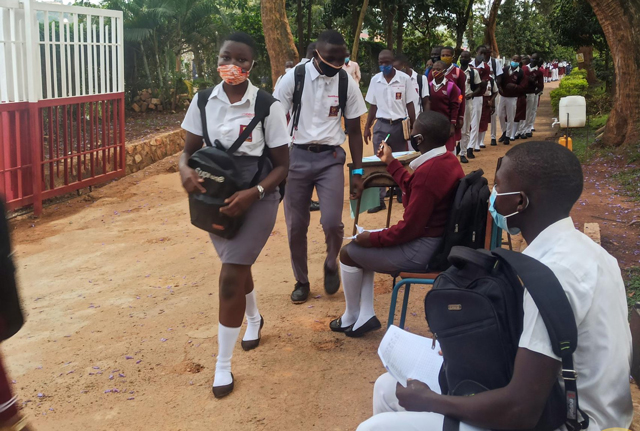 Students returned to the classroom after Uganda ended the world’s longest school closure. More than half of the nation’s students effectively stopped learning when schools closed in March 2020.

Uganda reopened its schools on Monday 10th 2022 after the longest pandemic shutdown in the world, but educators and others say that the closing has taken a lasting toll, eroding decades of classroom gains for the students.

Despite efforts to take on remote education, more than half of Uganda’s students effectively stopped learning after the government ordered classrooms to be closed in March 2020.

During the shutdown, many students took on jobs to support their struggling families and may not return to the classroom. Thousands of schools went into financial stress and are likely not to reopen. On top of that, countless teachers will not come back either, having turned to other job opportunities after losing their income during the shutdown.

“Our call during Covid has been that schools should be the last to close and the first to open,” said Robert Jenkins, global director of education at the United Nations Children’s Fund. “In the case of Uganda, the scale and the duration have been unprecedented.”

Janet Museveni, the Ugandan minister of education and the wife of President Yoweri Museveni, said that the shutdown had been introduced to curb the risk of children spreading the virus to their parents. The children, she said, “would become orphans — just like H.I.V./AIDS did to many of the families.”

Although vaccination rates in the total population are low overall — single digits percentage-wise — the authorities say that most teachers are now vaccinated, which enables them to reopen classrooms.

Still, the reopening — bars and concert venues will follow in two weeks — comes amid a fourth wave of the pandemic that has led to a nearly 200 percent rise in cases over the past 14 days.

“We believe this time Covid will not scare us,” Joyce Moriku Kaducu, the state minister for primary education, said in an interview. She disputed any notion that young people’s education had been sacrificed.

“I don’t accept that there is a lost generation,” Dr. Kaducu said. “What I agree to is there’s a percentage of our children who have gotten pregnant, the young boys have gotten into the moneymaking economy and others have gone into things. That does not mean that we have lost the generation completely.”

Still, even the government’s own data shows that the nearly two-year interruption in classroom lessons took a heavy toll on students, particularly those from poor and rural communities.

Education officials introduced remote lessons via television, radio and the internet, but many households do not have ready access to electronic devices or electricity, and are led by parents with limited education themselves, hindering their ability to help their children.

Judith Babirye Apologises to Ugandans and the Church #FDTvTodaysLife